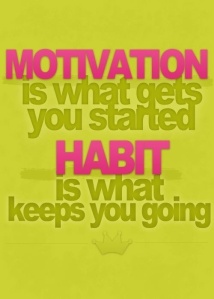 I don’t know about you, but for me, this year seemed to go by in a flash.

As I look back what comes to mind are the everyday routines and interactions in my life. They are as important in the long-term as the more dramatic events in my life. It’s those routine occurrences that are informing my New Year resolutions for 2013.

The difference this year is that I’m looking at the changes I want to make from the perspective of breaking old habits and creating new ones. This year I’m adding my understanding of neuroscience to my usual self-analysis. Habit formation is like acting on automatic pilot. It is so woven into the fabric of our behavior we don’t even stop to think that we’re on automatic pilot. We just keep on doing.

How are Habits Formed?

When we think of habits on a conscious level we tend  to view them as unproductive or negative, something that needs to change. From a neuroscience perspective, all behavior – positive or negative – is a result of habit formation.

When I shower and brush my teeth in the morning, I’d like to think that’s a good habit. Looking both ways before driving out of my driveway is also a good habit.

But, when someone waits and blocks traffic in the middle of a shopping center parking lot in order to get his or her spot and I start shouting… not such a good habit!

We all have habits that have either positive or negative consequences in our lives. Replacing a ‘bad” habit with a ‘’good” one is not a quick and easy task. Breaking habits requires establishing a new behavioral pattern – new neuronal connections – which takes time.

In his provocative book The Power of Habit, Charles Duhigg — shines a bright light on the recent research in habit formation and finds surprising good news.

Even if it were simple to build new habits, the process of overcoming a bad habit typically requires a lot more than building a positive new habit.

Out With The Old

Think of a habit as a conditioned, automatic process that has been established in the brain in response to a stimulus. I know – it sounds very Pavlovian – but the fact is that our habitual behaviors are correlated with specific brain regions – the hippocampus and long-term memory.

Because these “habit memory systems” are deeply ingrained, even after a new habit is established, it often happens that we slip back to old behavior. The longer a habit exists, the stronger the neural connections and the harder it is to change.

Those are the occasions when other skill sets come into play that enable us to tolerate distress and manage cravings and anxiety. Mindfulness practice and the ability to self-motivate when experiencing setbacks, by changing our negative internal self-talk, can also get us back on the path of sustained new habits.

As simple as this may sound, acknowledging and identifying a need to change an unproductive habit, while not a guarantee, is a good beginning. To change and sustain a new habit we have to form strong brain connections through new powerful associations.  The more often we do something, the bigger and stronger the neural connection becomes.

An important factor in the formation of a habit is a process called ‘context-dependent repetition’ (contextual conditioning).   Context can involve a place, role or person that has meaning as defined by our belief system.

For example, imagine that, every time you get home from work each evening, you change your clothes, put on your sneakers and go for a walk.  When you first change your clothes and put on your sneakers a mental link is formed between the context (getting home) and your response to that context (changing clothes, putting on sneakers). Each time you engage those behaviors in response to getting home, this link strengthens, to the point that getting home comes to prompt you to go for a walk automatically, without giving it much earlier thought – a habit has formed.

In other words, it works like this: our emotional states and past experiences – stored in long-term memory – shape our thoughts, which in turn activate automatic responses to external events.

These dynamics play a critical role in why it is so difficult to change a habit and create a new one. Habit, whether “positive or negative frees up the limited resources available to working memory. We don’t have to think too much about doing certain things in our life when we operate on automatic pilot.

According to Srinivasan S. Pillay, “When we try to eliminate an old habit and create a new one the brain goes into a state of conflict and tries to hold onto the habit, using emotional distress (amygdala activation) as the threat if we change.”

In With The New

One way to begin the process of forming a new habit is to consider your intentions. Setting an intention means thinking forward in time. On the other hand, being mindful of our intentions requires that we live in the moment.  So, how do we manage both?

In his article Enlightened Living, Michael J. Formica wrote, “Simply, we live backward in time! Living backward in time means living in the now as if it were the future that you envision.”

When I studied NLP we learned a technique called “acting as if.” It’s an effective approach for creating a pathway for a new habit.

We start by setting an intention. Next, using our imagination we create a compelling vision of the future that encompasses the habit we desire. The more we can embody the vision with feeling, the more  compelling it becomes! Then, act as if that life were ours NOW!

In the words of Charles Duhigg, “Once we choose who we want to be, people grow to the way in which they have been exercised . . . If you believe you can change, if you make it a habit, the change becomes real. This is the real power of habit. The insight that your habits are what you choose them to be. Once that choice occurs, and becomes automatic, habitual, it’s not only real, it starts to seem inevitable.”

Wishing you all a happy and peaceful New Year!